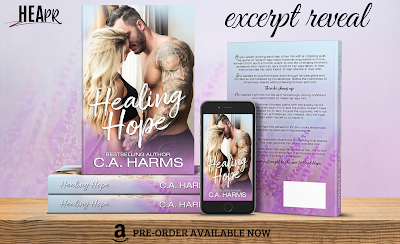 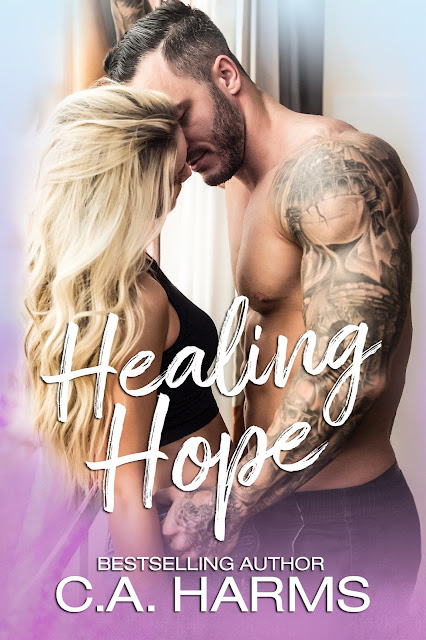 Hope Larsen is living each day of her life with a crippling guilt. The game of ‘what if’ has made it almost impossible to move forward from such a horrific event. In one life-changing moment, someone who meant so very much to her was taken. A man who once was her best friend. A man she fell in love with.

Now she must face the life she’d laid out before her alone, being reminded each day of his absence. The longing inside her, the desperation to be able to still love him without it hurting so much.

She just wanted to live without feeling the pain of losing Walker. But each time she attempted to move forward, there was that lingering thought that somehow she was tarnishing his memories.

Then he shows up. He waltzes right into her life as if he belongs. Strong, confident, and determined to make her see him.

When Travis Donovan crosses paths with the snarky blond, he’s intrigued. Her dismissal of him and his antics doesn’t have the effect she’d hoped for. In fact, it’s just the opposite. He’s not one to run scared from a challenge, but instead, he's the type to fight even harder to conquer it.

Though she tries to fight her attraction for the cocky electrician, she finds that his dedication fascinates her.

Over time, Hope comes to the realization that there’s one thing that scares her the most. Travis Donovan reminds her of the one she lost.

That stride, that smile, even the way he torments her…it’s all the same. He could be the one to show her that it's okay to move forward. It’s okay to love again.

Travis Donovan just might be the one to heal Hope.

ADD TO YOUR TBR ON GOODREADS:
http://bit.ly/HealingHopeTBR 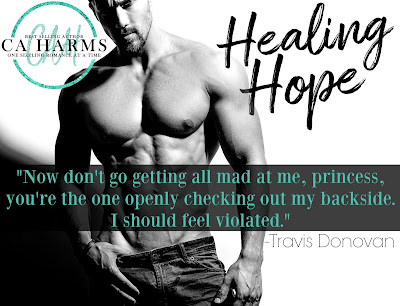 She was a fiery little thing.

She couldn’t have been more than five foot two, one hundred and ten pounds maybe, but that was even pushing it. Long blond hair, perfect tits. The woman definitely made this job a little more enjoyable, even if she was currently staring holes through my back. Or maybe it was my ass.

I look over my shoulder, and again I find her eyes focused on my backside.

Yep, most definitely staring holes in my ass.

I try to hide my smile when I turn around to face her, but when I see her cheeks flush again, I can’t stop myself.

“What’s so funny?” She narrows her eyes, doing her best to appear unimpressed. I know poking at her only infuriates her more, but again, it was an impulse I couldn’t control.

“I was just wondering if you wanted to grab your phone.” My smile grew wider when she arched her brow. She looked confused and again it found it fueled me more. “You know, to snap a picture of my ass.” Her eyes narrowed and she stands in a hurry and takes a step toward me. “Now don’t go getting all mad at me, princess, you’re the one openly checking out my backside. I should feel violated.”

Even if I wanted to believe her words, her eyes gave it all away. She couldn’t even look at me.

“This job was supposed to be done thirty minutes ago.” She chooses to move right over the earlier topic. “Are you sure you’re qualified for this job? Do you even know what you’re doing?”

I nod, loving once again that this woman thought she could outsmart me.

“Does your boss know about your work ethic?” Again she tries for stern and offended, and again she fails. She was an open book, and I was enjoying every fucking chapter. “I think he needs to know just how rude and obnoxious you are.”

“Maybe he does.” I shrug as I reach into my back pocket and pull out a card. Holding out my hand to her I watch as her gaze shifted. “Give him a call, princess, and tell him all about how you’re sexually harassing his employee.”

She jerked the card from me and instantly placed her other hand on her hip.

Shrugging again, I turn back toward the job and finished up with the last few things. “Whatever you say, Princess.”

I hear her practically growl in frustration, just before her feet beat against the floor to the other side of the room. Without turning around I imagine her seeking out her phone. My smile growing so wide it makes my cheeks ache as my phone begins to vibrate and ring on my hip.

Instead of answering it, I hang my head and do my very best to hide my chuckle.

With each ring, it grows harder to refrain and suddenly I’m hit in the back of the head with something soft.

Turning around, I look to the floor at my feet and see a light blue throw pillow. Ever so slowly, I lift my gaze and find a certain blonde with fire in her eyes staring back at me.

“Did you just throw a pillow at me?”

“Yes, I did.” She didn't even hesitate, “You should consider yourself lucky I didn’t go for the empty bottle instead.”

A moment of silence passes before she walks toward me once more and places a hand on each hip. The action alone pushes out her breasts, and it takes everything inside me not to lower my eyes.

“You are an ass.” The way she states this slowly enhances the humor once again. “For a business owner, I must say I’m surprised you are as credible as you are. You must spend most days in the office, otherwise, I’m sure it’d be hard to land a job.”

I stand before her, a screwdriver in one hand and a switch cover in the other, observing her every move. The way her nose wrinkles up as if she is confused by my lack of reaction to her words.

“And will you stop smiling?” Her words come out in more of a whine. I can almost visualize her stomping her foot.

“Why does my smile affect you?” I was rolling into dangerous territory here. Keeping things professional had never been a problem for me, until now. Messing with clients, or even renters of clients was something I never did. At this point though, it was addictive. This battle of wills between two stubborn people intrigued me. I liked the way she challenged me with just one simple look. “Does my smile make that fire inside you ignite? Does it make you feel something you don’t want to admit?” He taunted me a little more, and for a moment I slipped allowing him to see a trace of a smile tug at the corner of my lips.

That was my mistake, it was like throwing meat out for a hungry lion, it only gave him an invite to play a little more. “Tell me what part you like most?”

“You truly are an ass!” I hated how he affected me, but I also felt a spark of interest that I hadn’t felt in so long. His arrogance irritated me more than I should be allowing it to, but it reminded me so much of the person I had lost. The person I spend every day missing. They were alike in the way they held themselves, that confidence that gave them such a powerful impact on those around them. The mischievous glimmer in their eyes, it was all so much the same. MEET THE AUTHOR:
C.A. Harms is like any other addicted reader. She enjoys happy endings and HEA love stories. She hasn't always been a lover of Romance and had once been addicted to a good Mystery. Just recently she has taken on a new liking and now is a full blown Romance novel addict.