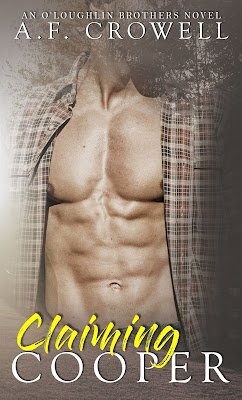 
Her first rejection.
Cooper O’Loughlin is everything Kinsley Allen has ever wanted.
Just when Kinsley should have been starting life, finding herself. She ended up running. When she landed back home to deal with the fallout from the one night that had changed her entire future she never imagined she would end up tied back to him.
Much like every other time before, Cooper shut her down before she could admit her true feelings. She was in love with her best friend’s brother.
In the dark shadows, secrets hide. Time was up. Kinsley’s consequences followed waiting to exact their revenge.
There’s no place safe, not even home.

"I loved this book so much and I cannot wait to read more in this series. I ugly cried, I laughed, I cried some more, I was happy, I was hopeful, and most of all… I fell in love with the O’Loughlin family."  ~Stacy Stewart

"Omg. My heart couldn’t handle this book a few times, but I must say it was amazing. This book takes you on a crazy roller coaster of emotions and tragedies." ~Candice Handy

"I read this story in one night... as in it was so good I didn't sleep because I had to find out what happened. AF Crowell is putting out another great series and this one has sexy cowboys!! YES!!!!"  ~Beth at White Hot Reads

Suddenly, the shed door burst open with a whoosh of humid air. On the other side was none other than the gorgeous Cooper O’Loughlin. “Ryan, I fuckin’ warned you once to stay the hell away from Kinsley. What the fuck?”
My jaw fell open at his words. Why would he have told Ryan to stay away from me? Ryan was Ashton’s best friend and I considered him a friend as well.
“You need to chill, bro,” Ryan said nonchalantly then handed the bottle back to me. “Kins asked if I wanted to do shots with her. It’s not like we’re in here fuckin’ or something.”
“Get the hell outta here,” Cooper seethed, his cheeks were crimson and splotchy.
What the hell is his problem?
“Later, Kins.” Ryan shouldered past the wall that was Cooper, muttering something indiscernible the whole way.
“Seriously?” I raised my brow. “What was that?”
“How wise do you think it is to get drunk with him?”
“Oh, get the hell outta here with that shit, Cooper. I’ve known Ryan almost as long as I’ve known you. He’s never tried anything.” My voice got louder as I went, and my arms flailed wildly. “And what the hell would it matter to you anyway if I was in here screwing Ryan?! You’ve made it perfectly clear you aren’t interested.” By the end, I was pointing my finger and yelling at him.
Cooper didn’t back down. He didn’t apologize. He yelled back. “When did I ever say I wasn’t interested?!”
I stood there, rooted to the floor, my whole world rocked to the core by one question. Before I could even answer him, he came at me from across the small room like a heat-seeking missile. Directed straight at me.
“Fuck it.” His strong hand slid along my jaw and roughly cupped the back of my neck at the same time his right arm came around my waist and yanked me to him.
Almost losing my balance, I crashed into his hard chest and found myself transfixed by his eyes. While I saw familiarity, I also saw a smoldering passion that had never been there before. It was spellbinding.
“I never said I didn’t want you.” 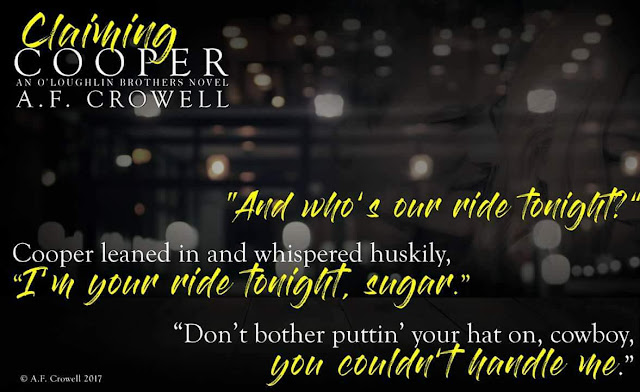 A.F. Crowell lives in Charleston, SC with her husband and two sons. They have two dogs, Diesel, a German Shepherd rescue and Dez, a black Labrador Retriever. She shares her love of books with her children, who have a head start on becoming life-long readers.
Romance fiction hit her radar when her husband forced her to watch Twilight one weekend when they were snowed in. That was it! From there her love grew; Contemporary Romance, Paranormal, YA and Dystopian are her preferred reads.