Poseidon, God of the Sea, has spent millennia alone due to a single terrible act. His consort Amphitrite has sworn never to forgive him, and he’s forced to live with the knowledge that he drove an innocent girl to her doom.
But when one of the Olympic Cove cottages gets an occupant with an all-too-familiar soul, Poseidon discovers that the Fates have given him a second chance. Now he must try to right the wrongs of the past and win back both his beloved consort and the mate he betrayed.
Assuming, of course, that the Mad Nereid Thetis doesn’t interfere… 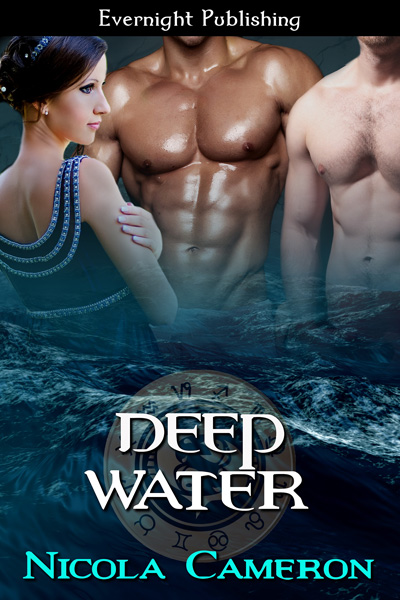 "The addition of new characters and old in this addition to the series if wonderful and more than ever the mythology is brought to life once again making you feel like you are right there living it!" ~Book Junky Girls

“I highly recommend this book, and the entire series. I recently reviewed Books 1 & 2, so if you missed that review, check it out (here.) If you are into a contemporary fantasy with a Greek God flair, these books would be for you.” ~ Love Bytes Reviews

“Once again, Nicola Cameron beautifully melds genres with Deep Water, making it a big, juicy read for fans of m/m romance, erotica, fantasy, adventure, and the paranormal. If you're a fan of even one of these (hell - even if you're not!), do yourself a favour and dive into this series. You will NOT be sorry.” ~Author L.D. Blakely

“What a great book!! I loved it, and I was very excited to read it. The first two stories in the "Olympic Cove" series were great, so I pretty much counted the days until this one was available.” ~Amazon Reviewer

Feeling like he was in another one of his dreams, Griffin let himself be eased onto the beach blanket. He stretched out, wiggling a bit to get comfortable as Dunn followed him and did the same. Overhead, the Floridian night was heavily spangled with stars.
“This is nice. Should’ve done this the first night I got here.” He glanced at Dunn. The man was a shadowy form stretched out at length, hands clasped placidly on his middle. “Comfortable?”
“Very,” Dunn said, staring up at the stars. “You’re right. This is quite lovely.”
“Yeah.” Griffin swallowed. He had no idea what to do next.
Except to be honest. “Dunn, I need to say something.”
“Mm?”
“I hope this doesn’t offend you because I really don’t want to do that, and to be honest I don’t know why I feel this way but…” He swallowed, hearing his throat click. “I really want to kiss you right now. If you don’t want to, it’s fine, I understand, but I thought I’d ask.”
“Ah.” Dunn’s head turned towards him. “Well, then, if we’re being honest, I’d like to kiss you as well.”
Something electric shot through Griffin, swamping the fear. “Oh. I didn’t … I mean, I thought—”
“That I prefer women? I do, as I suspect you do. But I’ve been known to make exceptions.” The other man chuckled softly. “I believe the term is heteroflexible.”
My God, has he done this before? That’s not bad, though. At least one of us knows what he’s doing. “Okay, good. Um…”
“Shall I come over there?”
“Please.”
Griffin rolled onto his side and Dunn mirrored him. A hand came up and cupped his cheek, warm against the soft coolness of the evening breeze.
He closed his eyes as Dunn leaned forward. Lips brushed against his, delicately intent. His lips tingled under the soft pressure, and he could feel the prickle of Dunn’s mustache and beard, something he’d never felt before, at least not during a kiss.
It was weird and slightly scary. It was also fucking terrific. “Do that again,” he whispered when Dunn pulled back.
“Eagerness. I like that in a man.”
They kissed again, and Griffin let his lips open. The tip of Dunn’s tongue traced along them with that same delicacy. The sensation sizzled across his nerve endings, poking his dormant libido right where it counted.
Dunn pulled back a bit. “If you want to stop at any time, say so,” he said, his voice rough.
“Right, got it. Now kiss me again.”
He did, tongue slipping into Griffin’s mouth with deft skill. Griffin gave himself over to it, enjoying the sensation. It was similar to kissing a woman but with a different undertone to it, hungrier somehow. He felt like he didn’t have to hold back, that anything he threw at Dunn the other man could take.
And then Dunn’s tongue licked along the roof of his mouth, sending sparks of desire shooting through him. He couldn’t help moaning in unabashed pleasure.
Dunn took that as a signal to roll closer, fitting himself along Griffin’s body. It was like the kiss, scary and exciting at the same time. Dunn slid an arm around him, a hand coming to rest in the small of his back as his mouth continued to duel sweetly with Griffin’s.
After a bit Griffin felt something poking him in the thigh. It dawned on him what was happening. He broke the kiss with a gasp, sucking in air. “Fuck. You’re hard.”
“Well, yes, that does happen.” Dunn sounded amused. “Does it bother you?”
Griffin gulped. It should, he knew that. And yet all he wanted to do was do a wicked little shimmy against Dunn, make the other man moan for once. “No. It’s fine.”
But Dunn paused, his hand lightening on Griffin’s back. “You’re not aroused.”
He shook his head. “It was the last round of radiation. Haven’t been able to get it up since.”
“Oh.” Dunn’s hand came to rest again, but now it was on his waist. “Am I hurting you? Doing this, I mean?”
“If you’re asking me if you’re giving me blue balls, yeah, a little.” He swallowed again. “If you’re asking me if I want to stop, the answer’s no. Just don’t expect me to be poking you back.”
He wasn’t sure, but he could have sworn he saw Dunn smile. “All right.”

Ian is determined to get his book written while visiting down in Florida, but he never expected Bythos and Aphros. Greek demigods who tell Ian he's their fated mate. Being widowed after his wifes death two men who are meant for him is a bit much to understand right away, but there's no denying the chemestry. Just when things between them are getting fugured out an enemy comes in determined to kill them all.

Ian is a sweetie who has had it rough after his wifes death. He's lonely and just wants someone who is there for him, but he has an inner strength that shines through when it's needed most.

Bythos is the brains of the trio a true genius he uses what he has learned to try and help make the planet a cleaner place.

Aphros is a jokster with a penchant for cooking, but don't discount him just because he isn't as smart as his brother. He has other strengths that you see throughout.

The three balance each other and bring a peace to the others that apart they don't have.

The story itself is interesting bringing Greek mythology to life in a whole new way and the way it is written makes it feel like you are right there in the world living it with them. The characters throughout are also well written and make it so easy to fall in loe with them!

Posiden Greek god and overall difficult person throughout the series thus far. Now it's his turn for his story to be told and wow what a trip it was!

Amphitrite was his consort until he screwed it up, but how did he do it, well read it to figure it out!

Thetis is still causing problems now more than ever and everyone is doing everything they can to stop her.

And old secret comes to light, with someone new in the picture will Posiden and Amphitrite be able to get over old hurts?

The grumpy old man get seen in a new light! And oh how I loved it! Seeing him in a new way was great and I enjoyed every minute of it!

The addition of new characters and old in this addition to the series if wonderful and more than ever the mythology is brought to life once again making you feel like you are right there living it!
Posted by Unknown at 5:00 AM