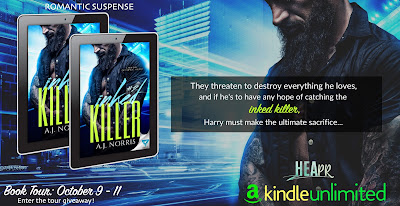 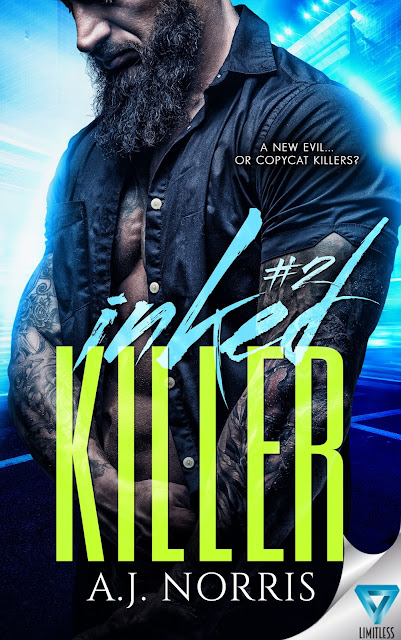 The murderer is behind bars, but the town of Webster still isn’t safe…

The psychopath who terrorized the town six months ago is in prison, but more young women are being found dead. Detective Harry Hunter suspects the deaths may be the work of not one, but two copycat killers.

When his two main suspects disappear and the case is suddenly reassigned, Harry fears the body count will continue to rise, while the mystery remains unsolved. But he isn’t about to give up.

They threaten to destroy everything he loves, and if he’s to have any hope of catching the inked killer, Harry must make the ultimate sacrifice… 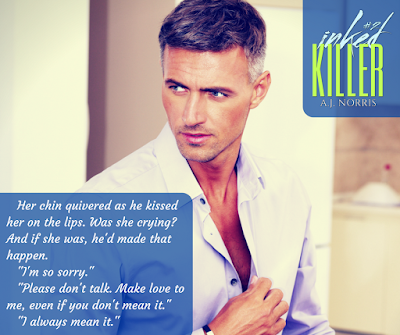 EXCERPT:
Natalie lay on top of the comforter in socks and a flannel nightshirt that had risen up, revealing a bit of her panties. His breath caught, and his manhood woke up. Everything about the day went dormant. Thank God, because he was sick to death of thinking about it. He washed his face and hands then left his clothes on the floor of the bathroom. He walked into the bedroom and immediately returned for his clothes. Better to avoid that look of hers when she saw the dirty pile. Harry was still learning how not to be a disappointing pig. His girlfriend deserved a man who could pick up after himself. With Annie, he’d gotten too comfortable, and never appreciated her enough until after she died.

Natalie stirred on the bed, so he stopped moving. Once she settled he slipped under the covers. However, with her on top, the blanket didn’t quite fit over him. “Hey Nat, why don’t you get under the blanket,” he whispered. She whimpered and he helped her get underneath.

He put his hands behind his head and sighed deeply. Although exhaustion had taken root in his body, his eyes were wide open.

Harry rolled to his side and reached between the covers for Natalie in the dark. She turned and put a hand on the side of his head. “You okay?”

“I know we’re both tired but I need you right now.”

Natalie rolled over and laid on top of him. She kissed his lips briefly. Harry moaned against her mouth. “Mmm, you want me too?”

“You question that? You may be 55 but these arms,” she ran her hands over his biceps, “are sexy. And this stomach of yours, it may not be the six-pack you once had but it’s flat and hard.” She kissed him again.

“Yeah?” He squeezed her bottom cheeks.

“I love this butt of yours. So smooth.”

“You’re not?” He smiled even though she couldn’t see his face in the dark.

Natalie snorted. “I bet you do.” 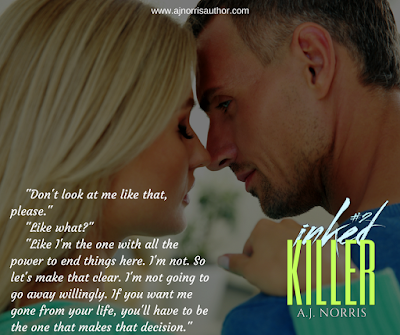 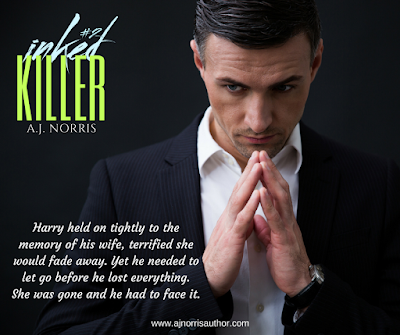 MEET THE AUTHOR:
A.J. Norris is a romantic suspense and dark paranormal romance author. She enjoys being able to get inside someone else's head, even a fictional one, and see what they see. Watching how her characters deal with difficult situations or squirm with the uncomfortable ones makes the hard work of writing all worth it. However, writing and reading weren’t always in her foremost thoughts. In fact, her love affair with writing came as a shock to everyone she knows, including herself. At a young age, she rarely opened a book, unless forced to read something for school. But that’s all behind her now. She wrote her first book several years ago, which turned out to be a surprisingly cathartic process, and she hasn’t been able to stop writing since.

A.J. loves going to the movies, watching her son play baseball, and communing with other writers. She’s a member of two writer’s groups and RWA. She lives in southeastern Michigan with her family, who are extremely tolerant (at least most of the time) of all her late nights behind the computer.