The Evolution of Elsa Kreiss 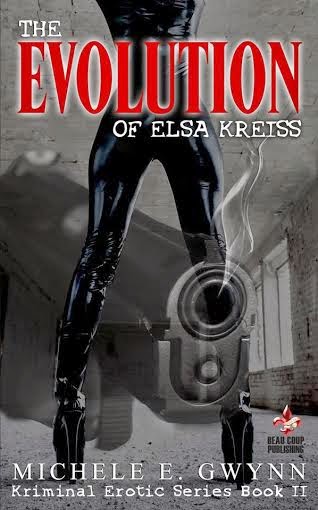 From spanking bad men to arresting them, Elsa Kreiss’s life takes a sharp turn from enforcing the rules of her dungeon to enforcing the rules of law after she joins the German police force. An unsolved case of three missing girls from Charlottenburg pulls her mentor, Kommissar Joseph Heinz, back into the dark abyss just as love finds him. While he searches for a killer, she fights an attraction to a very bad boy. Lukas Trommler is everything she likes in a man; cocky, confident, and hot. An art buyer at a local gallery, Lukas exudes culture with an edge of danger. He invites her into his world where she comes face to face with a familiar monster, Yuri Ivchencko, one of the most powerful and wealthiest men in the world with ties to the Russian mafia. His obsession with the sick and twisted side of human nature expressed in art offends Elsa, who doesn’t hesitate to say so. Her outburst lands her squarely on his radar.

“All right. But she starts at the bottom, and you and Hans are responsible for her. She must learn to clean every single piece of equipment properly and quickly, and if she messes up, if even one of the dommes complains about her, that’s it. No job!”

He walked out and left them standing there. After the door closed, Hans grabbed Elsa up in his muscular arms and swung her around. “You got the job! Fantastische, mein Liebling!”

Smiling hugely and feeling as if a weight had been lifted off her shoulders, Elsa laughed, then kissed Hans on his cheek. “Danke, mein Freund! Danke, David!” Hans set her down and she hugged David, too.

“Don’t thank me yet. We have to work hard to make you the best maid these dommes have ever seen. And in between, we’re going to teach you the art of dominance and submission. It’s really the only way you’ll be able to make any real money to survive.” Hans was so happy to hear his lover say this that he kissed him full on the lips. It turned a little sloppy as they momentarily forgot Elsa was in the room.

“Geez, guys. Cool it down!” She laughed at their antics. Her friend was so in love with David, and so happy to be working with him at Club Sexo as a ticket

agent, and now his best girlfriend would be working there, too. Hans was over the moon.

Everything changed then. The true miracle, however, was that they got Anno back before any harm could come to him. That never happens, according to Kriminalkommissar Joseph Heinz who was the lead detective on the case. Heinz used his connections through Interpol to help get Anno back. They wouldn’t have even known where to find him had it not been for new friends she’d made at the time, Sarah Brown and Paul Christiansen. Actually, it was because of the latter that Anno had been taken to begin with. The pedo was Paul’s uncle who’d sexually abused him as a child. It turned out that Knudson had targeted Anno on a recruiting mission in Berlin, and he blamed his nephew for causing him to lose out on gaining Elsa as an employee, a ruse he invented to get his hands on Anno.

Heinz brought her brother home safe and sound, and unharmed. Since that day, Elsa vowed to find a new career, one that would have her home at night to better keep an eye on Anno, and one in which she would be around a better quality of people. She really wasn’t quite sure what that career might be, but she told Heinz and his partner, Birgitta Mahler, that somehow, she wanted to help others, and maybe work in a field where she could fight against people like Knudson.


Michele E. Gwynn is a freelance journalist in San Antonio. She writes for newspapers, magazines, and online websites like Examiner.com (under the categories of Film, Animal Rights, Healthy Food, and Sex and Relationships), Yahoo Voices, Alwayz Therro Magazine, and more. In addition, she also edits websites and books - recently editing the debut supernatural romance novel, Lone Wolf Rising, by Indie author Jami Brumfield, and her next novel in a new series, The Witch's Vampire - Mystery Springs Unleashed. Prior to her career in writing, Ms. Gwynn worked first as a referral coordinator, billing manager, then office manager for a dermatology practice.

She resides in the small town of Schertz, Texas on the northeast side of San Antonio with her four felines who so graciously allow her to reside in their home.